Young Children and Screen Time: Nothing to Gain & Lots to Lose! 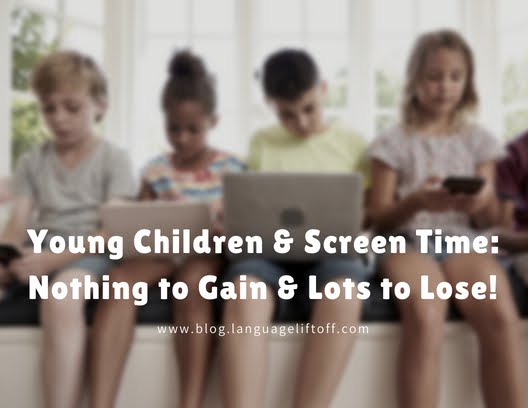 Children in the United States are spending more time in front of screens — watching television, movies, and using computers and iPhones — than ever before. They are spending much more time with these types of media than with books or in free play, and it is happening at younger and younger ages. Parents are not just “letting” their children watch but are often actively encouraging these forms of passive entertainment. TV, iPads, and iPhones are always available babysitters, so it’s no wonder parents sometimes rely on screens to keep kids busy while grown-ups take care of household chores, bills, or catch up on their emails.

Children under two spend, on average, almost two hours every day watching TV or using other screen media like computer games and video games.[1] Previously the American Academy of Pediatrics, advised that children under 2 should not be watching any TV, videos, or DVDs. Though they changed their no screens recommendation at the end of 2016 to include only babies under the age of 18 months, the American Academy of Pediatrics still recommends no screen time for children between the ages of 15 months and two years by themselves. Parents should instead encourage more interactive activities such as playing and talking in order to improve their listening and social skills, but if they have to use a screen they should treat it more as a picture book and interact with the screen alongside their child.[2]

Research shows that, for children under 3, it’s not just what’s on the screen that matters but that it’s on at all. Even if the TV is simply “on” in the room where the child is playing, there are negative effects. For example, a study found that when an adult TV program was on in the room where babies or toddlers were playing, the children didn’t play as intently or as long as when the TV was off.[3] “Background TV” also affects how a child interacts with his or her parents. When the TV is on, parents tend to be more distracted and less attuned to their children and their needs, reducing the quality of the interaction. Young children are better able to complete complex and sophisticated tasks when they work with an adult or older child. When parents are attentive, children are also more likely to engage in independent goal-oriented play, higher quality play, and more focused play.[4]


What About TV Programs Intended for Young Children?

TV programs meant for babies and toddlers don’t really help them learn, and in some cases may slow down their learning. The more TV a child under 3 watches, the more likely he is to have trouble with reading and paying attention later on.[5][6] A study from 2007 found that the more television a baby 8 to 16 months watches, the fewer words she knows.[7]  Early childhood experts agree that because infants and toddlers learn differently from older children and adults, they don’t benefit from direct teaching, which is the technique most commonly used in “educational” TV shows and baby videos. It is important to note that the American Academy of Pediatrics notes two programs, Sesame Workshop and PBS, as two makers of evidence-based children’s educational media.[2] Programs such as the Baby Einstein brand videos are just one of the many videos developed and marketed to parents of very young children as “educational.” But with research showing no benefit, and under threat of a class-action lawsuit for deceptive advertising, Disney began offering refunds for the videos in 2009.
Not only has screen time been linked to language delay and smaller vocabularies, but studies show that the more television infants and toddlers are exposed to, the more likely they are to be inactive and obese,[8] have difficulty sleeping,[9] and show aggression. A study published in 2009 found that the more TV a 3-year-old was exposed to (watching it or in the room where the television is on), the more likely he or she was to act aggressively.[10] Screens provide a lot of stimulation, but it’s all energy “in” and no energy “out” or expended.  This may explain why young children act out after hours of watching, and why hours in front of the TV can lead to weight gain.[11] Research shows that with every hour of television, children consume an additional 167 calories.[12] There are several reasons why children who spend a lot of time watching TV put on extra pounds: the number of food ads they are exposed to while watching can increase their appetites; many kids get into the habit of snacking while watching; and they burn off very few calories burned while watching.[13]

Very young children learn best by relating to real live people, but they also learn by moving and doing. Screen time detracts from children using their communication skills, and if they don’t practice their face-to-face interactions, they may lose their ability to evaluate emotions as well. Part of the problem with screen time is that young children who watch TV and DVDs or use computer games may be substituting these activities for free play. Play, as it turns out, is the ultimate “personalized educational curriculum,” with each child creating his own challenges and solutions — at little or no cost. It teaches children to think abstractly about different situations and learn from other people’s perspectives, and it taps into their curiosity, motivating them to learn.[14] Play provides children with opportunities for different types of learning – physical, social, emotional, intellectual, and language development — in a context they understand. Because of this, children are more likely to retain what they learn while playing. This is why child development experts insist that play is essential to social, cognitive, emotional, physical and moral development.[15]

Some parents and early childhood settings are replacing televisions with computers. While computers can be terrific teaching tools, too much time in front of a computer can lead to some of the same problems as too much time watching TV, such as obesity. According to one study, children ages 4 to 7 who were overweight were able to become more physically active by parents’ cutting their screen time in half, including computer use.

What about School Age Children and Teens?

With media use on the rise, screens are not only in every home, but in every pocket. Within the past 10 years, the amount of time that adolescents spend on a screen has increased by 2 ½ hours. Teenagers spend an average of 8-9 hours a day on their phones, including streaming videos, texting, and scrolling on social media, and lower income children spend even more. Tweens spend an average of 6 hours/day.[19][20] All of us — not just children and teens — have been affected by the spike in media consumption: we spend less time reading[21] and less time sleeping.[22]

Spending a lot of time in front of screens in the early years can also lead to increased screen time later in childhood, which may contribute to problems with peers and at school. While media use itself may not be the cause, kids who spend a lot of time using media, tend to get lower grades. One study allowed 12 to 14-years olds to play computer games for a long time or watch a lot of television and found that both types of entertainment affected sleep, and the computer games also affected the children’s performance on certain memory tests.[23] New technology such as iPads or smartphones are keeping children up at night when they should be asleep. These devices are disrupting their sleeping habits and are creating an unhealthy environment to develop in.[24] Research also shows that children and teens who watch a lot of television are more likely to have health and behavior problems, including drinking and taking drugs.[25] The more movies and TV that children in grades 5-8 watch where characters or actors are smoking, the more likely children are to smoke later on.[26]

So What’s a Parent To Do?

Very young children have nothing to gain and lots to lose from spending time in front of screens, instead of playing and interacting with friends and loved ones. Even when the TV is simply on in the background, infants and toddlers lose out. For older children (two and up), the American Academy of Pediatrics recommends that parents limit screen time  to 1-2 hours a day, and keep televisions in common areas — never in a child’s bedroom. TiVo, DVRs and other devices are terrific tools for parents, allowing them to record shows for children that can be seen by them at an hour that’s right for your family’s sleep schedule and without commercials!

Here are some ways you can limit screen exposure and increase interactive play:

Telepractice sessions for therapy and tutoring are available at this time. If you are interested, please Contact Us for service inquiries and to book sessions.